Mr. Joseph is the owner of Shoot-A-Way and the inventor of the Shoot-A-Way basketball training equipment. Coaches all over the country use the automatic basketball rebounder to improve the skills of their basketball athletes.

While in 8th grade, Mr. Joseph went to a basketball camp at Ashland College where he saw a 1950’s film about Duke University using net systems to help return the basketball to the athletes. It was then, he discovered the net systems helped athletes improve their shooting percentage by 10%. Mr. Joseph told his camp coach that he was going to build one, and that is just what he did when he got home from camp. With pipe and wire, he went out and designed a system that would make him a better athlete

Years later, the re-designed system offered coaches a tool for improved basketball shooting skills. Currently, over 10,000 Shoot-A-Ways have been sold across the country to help athletes work harder and improve their skills faster.

“The Gun” is a great basketball shooting machine for dramatically improving your basketball players skills. This basketball machine will act as an automatic rebounder, instantly rebounding a made or missed shot and giving a direct return pass for another shot. The Gun has a timing device so you can determine the distance and the speed of your return passes, thus creating situations where basketball athletes can develop their skills with a game simulation intensity. The Gun can fire up to 1800 shots per hour and has an optional computerized scoreboard that counts and displays makes, total shots, and shooting percentage. The Gun is an excellent piece of equipment for all levels from novice to pro athletics. 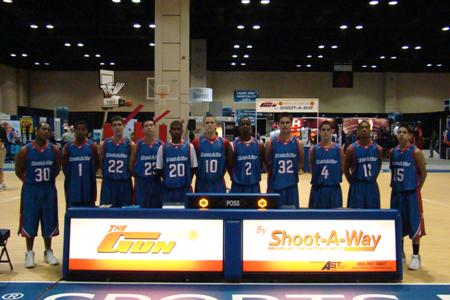